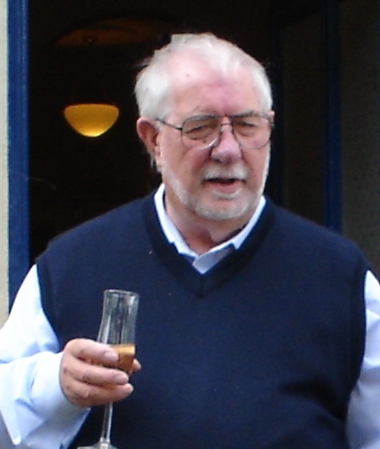 The received truth is that one does not make close friends when one is older. That was certainly not true with Harry who became a really close and valued friend almost from the moment we first met at the Leeds Club over twenty years ago.

We shared many interests:

- the importance of politics. Although we came at the issues from two very different traditions, we agreed on most things. He was certainly my favourite socialist and we sympathised mutually over the electorate's regular lack of vision! For much of his working life Harry was a trade union representative but he gave short shrift to any member who wanted Harry to argue an indefensible case.

- a love of the Leeds Club, in which our shared bolshieness ensured a united front when drastic action had to be taken to oppose an officer who had outstayed his usefulness - including having to extract the deeds of the building from under the man's bed!

- alongside being very naturally at home in the Club - and it was always a good day when one could join Harry over lunch, such was his conviviality - there was Harry's love of and knowledge of wine, particularly French wine. He was my favourite wine lover and for a decade or more, right up to his death, he was the convenor of the "Alternative" Wine Group which originally met on alternate Fridays (the other Fridays were training days!) When it ceased to be possible to use the Club the two groups amalgamated and Harry ran both - the only rule, he said, was that there were no rules! He could be quite irascible with any colleague who, he believed, was not taking the task in hand seriously enough and was just guessing.

- an affection for the village and the wines of Faugères, the centre of the eponymous appellation, in the depths of France. He became a member of the co-operative that owned a little house there and was a regular visitor until his health made it too difficult. We would go on visits to wine producers and, after buying several cases early on in the tour, Harry would say, "that's it, I've bought enough for this visit. I'm not buying any more." However, almost invariably, at the next place and tasting, he would enthuse about the wines and immediately buy more cases! He came round to our house in Bramley each Monday evening, ostensibly to taste wines - mainly from Faugères - but there were few bottles that were not empty at the end of the evening! The origin of the Monday evening "soirée" was that my wife, Liz, was usually out rehearsing and the late Geoff Percival, another Faugères co-op member and a brilliant IT man, started coming round ostensibly to update the computer but really to enjoy good wines. Harry heard of these convivial sessions and invited himself to join us! He then rather took over and invited a third friend to come round! More than anything I miss those evenings together and Mondays are very solitary.

- a love of books and, in particular, the Leeds Library in which Harry was a very regular member and user until his breathlessness inhibited his mobility, whereupon I was very happy to feed his voracious literary appetite from my library, particularly with political biographies; he was, incidentally, my favourite pedant! Typically his only letters to The Times were to point out poor grammar or the misuse of a word.

- a love of music of which Simon Lindley has already spoken, mentioning his membership of numerous choirs and his long service as a steward at Town Hall concerts.

- a fondness for the railways on which he spent almost all his working life. He was not a railway "anorak" but he lamented the destruction of the network. He was delighted at the reopening of old pieces of line. One of these was a mere hundred or so metres of a line north of Huddersfield. This bit of track, known as "the Bradley curve", enabled through running in and out of Leeds on lines that had been blocked for decades. Harry suggested that he would like to travel over the newly available routes and I was happy to accompany him. I planned the route, starting from Bramley - where we could park - at 6.15 am, via Bradford to pick up the Grand Central railway, round to Doncaster via Halifax and the delightfully named Pontefract Monk Hill, then back to Wakefield Westgate and taking the local train via Wakefield Kirkgate to Deighton and back via Brighouse to Leeds. We eventually arrived back at Bramley at 11.15 - five hours to make use of a hundred metres or so of new track!

Harry was a great raconteur with a fund of good stories. One favourite, that many of you have no doubt heard at least once, concerned his colleague, Charlie Cook, who was on duty with Harry at Keighley booking office. To have a stock of printed and numbered tickets to a particular destination required there to be at least twelve tickets booked to it in a year. Otherwise the clerk had to write out a blank ticket for each passenger, including the route, and then to enter the details into a special ledger. Consequently Charlie's face fell when lady arrived at his window and asked for two adult and two children's returns to Broadstairs., for which, of course, there were no printed tickets available. Charlie then engaged the lady in conversation: "Why do you want to go to Broadstairs - it's a very boring place, particularly for children?" "Oh, is it?" responded the lady. "Yes," Charlie continued, "why don't you go to Blackpool, it's much livelier for a family holiday." "You think so?" said the lady, "all right, book me the tickets to Blackpool." At this point Harry would pause, for the better effect of Charlie's punch line, "Ah, if you want Blackpool, you need to go to my colleague's window, round the other side." Assuming there had been a family discussion on its holiday destination, I only hope that the husband was happy at the induced change of plan.

How should we remember Harry? Above all to realise that he relied greatly on Christine to whom he was deeply attached. He was convivial and always a pleasure to be with; he was generous and a quiet contributor to many projects and individuals; he was loyal and once he was committed to a cause or to an individual he stayed on board; and he was man of integrity. One friend to whom I communicated the news of Harry's death, said, "He was a real gent." I agree.