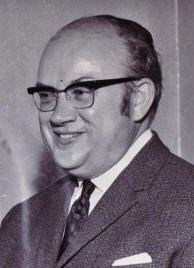 Harry Woodhead, who has died at the age of 89, was just about the last of the traditional style of local reporter, with his trademark trilby hat always to the fore and his regular spot at the Town Hall Tavern on The Headrow in the centre of Leeds. Harry was a shrewd investigator of stories and purveyor of facts. His invariable politeness and quiet interrogation often induced local politicians to divulge more than they intended, with the result that Harry's reportage would often have additional material to that in other papers or in the "official" version. This was also the case with victims of crime, including some who had survived Peter Sutcliffe, the "Yorkshire Ripper".

A Leeds man, Harry began his long career in journalism in his teens as a junior reporter on the Yorkshire Evening News, in its day an important local newspaper but which ended in December 1963. Harry had moved to the Bradford-based Telegraph and Argus in 1950 and covered Leeds for the paper for forty-six years!

Some years ago, possibly on his 80th birthday, Harry held court at the Beulah Hotel, close to his Farnley, Leeds, home, where he had invited friends for a typically convivial evening.