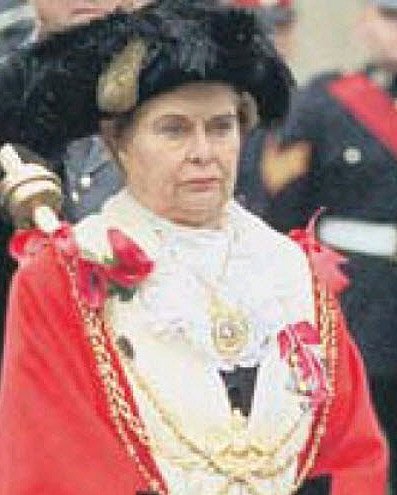 Peggy White, a Leeds Conservative stalwart and long-serving city councillor, has died aged 86 after suffering a stroke. Peggy was deputy lord Mayor of Leeds in 1993 and became lord mayor in 1995. She was made a CBE in 1978 for her work in social services.

Born Jessie Margaret Lyth but always known as "Peggy", she was educated at Harrogate college and went to work in industry in London. She then returned north and in 1963 married Peter White who became a professional Conservative agent in Leeds. Peter had the unusual distinction in 1968 of winning a city council seat on the toss of a coin having tied in votes with his Labour opponent in a ward considered "safe" for Labour. Peter always wore a rather seraphic smile when Peggy embarked on one of her regular robust defences of her political position.

She had been elected the year before Peter and in 1970 became chair of the council's new social services committee. With the then Conservative dominance in local government, she became chair of the national association of municipal councils' social services committee. She was a member of numerous statutory and voluntary bodies in the social services and health sphere. These included the area health authority, the National Children's Bureau, the executive of the RNIB and the National Volunteer Bureau. Her opponents sometimes accused her of being overly harsh in her attitudes to her chosen specialism but none could gainsay her immense energy and dedication, nor her personal kindliness and generosity. She was a firm Conservative party loyalist and held numerous offices in the Leeds party even though, with her forthright views and a difficulty in appreciating opposing opinions, she was often a very uncomfortable colleague. She had to fight off an attempt to deselect her for re-election in her city council ward in 1990 - after 23 years on the council.

She eventually retired in 1998, having also been latterly a member of the West Yorkshire Fire Authority and leader of the Conservative Group on the Police Authority.

In talking with her recently she still had strong views on current issues and on political colleagues but had mellowed enough to admit that others might think differently. She rather liked being known as a tough political animal. She seemed in fine form and all her friends were surprised to hear of her sudden death. Peter died in 1988.