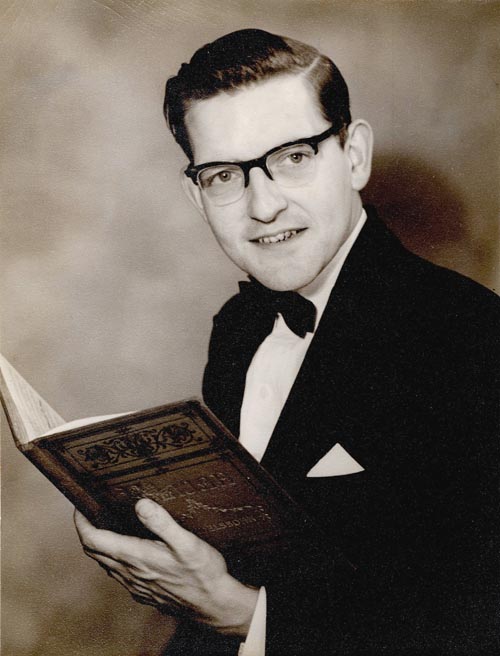 Donald Webster epitomised the good 'Clubman'. He was always good company, with that key quality of being genuinely interested in his colleagues around the lunch table or in the clubroom. He was remarkably well read and had acquired a vast fund of anecdotes, an apposite example of which never needed any encouragement to be produced, but he took as much delight in listening as in telling. I gather that at times the stories could be rather more Rabelaisian than his rather demure appearance would suggest! He acquired friends easily and retained them loyally; he enjoyed organising his own presence in the midst of his 'regulars', even to the extent of arriving very early at the Leeds Luncheon Club each month in order to put cards on half a dozen or more prime places for us all - rather to the annoyance of some other less fortunate members, it has to be said!

Music was at the heart of Donald Webster. His knowledge of the classical repertoire was encyclopaedic and in his special field of English hymnody he was acknowledged as one of the greatest experts. I recall that he entertained us at a Club lunch last year at which he explained and extolled the neglected music of William Lloyd Webber. I went straight out and bought the CD! Typically, one the last tasks he did before his illness caught up with him, was to arrange for the concert pianist Kathryn Stott to speak at a Club lunch. This event, on 13 June, will be dedicated to Donald's memory.

Donald's musical criticism was respected and valued, even though it could make its recipients nervous of opening the Yorkshire Post on a Monday morning. He was invariably forthright and shrewd but his language when pointing out the flaws in an amateur concert differed from his reviews of professional musicians in that, as he once explained to me, the amateurs deserved the benefit of sharp criticism when the performance demanded it but they also needed encouragement.

Donald and I started off poles apart politically, though we converged more and more over the years, and he loved to argue politics without ever falling out with those of a different hue. His memory for events and of what different politicians had said at different times was unusually good and his ability to recall inconsistencies or definitive statements led him to be increasingly exasperated with current affairs.

Donald's presence at a Club function ensured the availability of a ready made vote of thanks to a speaker. He was always happy to 'say a few words', invariably producing an anecdote to fit the occasion. It was typical of Donald that when I wrote in the 'Owl' inviting volunteers to serve on the Club Committee he was the only member to come forward. He will be much missed by all his many friends in the Leeds Club. Our sympathies go to Joan and to Chris.