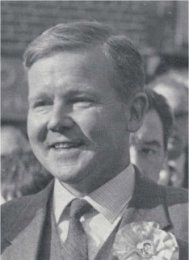 Richard Wainwright's role was pivotal in the post-war revival of the Liberal Party. His particular skill and emphasis was on taking the broad brush and sometimes, particularly in the case of Jo Grimond, leader from 1956 to 67, high flown generalities about the party and its organisation and translating them into the detail of workable structures that the somewhat anarchic party activists would accept and operate. A key aspect of such practicality was his role in the five person Organising Committee, chaired by Frank Byers, which in the early 1960s largely sidetracked the cumbersome party committee structure with its all embracing remit to do whatever was necessary "to strengthen the impact of Liberalism upon the electorate." Similarly, following the 1974 general elections, when the party urgently needed to transform its financial affairs it was to Richard Wainwright that it turned and his subsequent report was significant in the subsequent growth of special sections of the party with their own direct funds. In this approach he was influenced by the example of the successful local government department at party headquarters which he had inaugurated - and funded personally - in 1960.

Wainwright had a shrewd instinct for reading the mood of the party and almost invariably topped the poll for any party office voted for by members at large. He enjoyed his popularity with the party's grassroots and fostered it by taking on a heavy load of speaking and campaigning engagements across the country. The small group of party officers and executives, including Gruffydd Evans, Pratap Chitnis, Tim Beaumont and Michael Meadowcroft, who wanted to prevent Jeremy Thorpe following Grimond as party leader in 1967 attempted a "draft Wainwright" initiative but, without any support from Wainwright himself, and having only been in Parliament one year, it had no chance of success. Given his relationship with the party it was significant that he risked it by finally causing Jeremy Thorpe's resignation from the Liberal leadership by calling publicly on him to sue Norman Scott over the allegations which eventually figured in Thorpe's trial. At the time so little could be said openly by party officers about Jeremy Thorpe's autocratic leadership style and of the potential danger to the party of his personal affairs that delegates to the following Liberal Party Assembly in Southport, unaware of the true situation, gave Wainwright the only rough ride of his career.

Richard Wainwright's political views and motivation were a consequence of being deeply affected by the social conditions of Britain in the 1930s. His long association with the Methodist Church, particularly on difficult housing estates in East Leeds, pointed him more towards liberalism than socialism and he joined the Liberal Party whilst an undergraduate at Cambridge University. He was a conscientious objector during the war and served with the Friends Ambulance Unit. He remained in Europe for the first phase of postwar reconstruction and thus missed being involved in the 1945 election.

Richard Wainwright followed his father into the Leeds accountancy firm of Beevers and Adgie, becoming a partner in 1950. He was very much a Leeds person, as was his wife, Joyce, who has been a formidable campaigner in her own right. He held directorships in a number of Leeds-based companies, including Charles F Thackray (surgical instruments) and Jowett and Sowry (office equipment), He contested the Pudsey constituency in the general election of 1950 and again in 1955, but for the 1959 contest moved to the Colne Valley seat which spanned the West Riding between Huddersfield and the outskirts of Oldham. He assiduously cultivated the towns and villages of this widespread constituency and was elected at the 1966 election, losing in 1970 but then winning the following four general elections there before his retirement in 1987. He and Joyce were devastated when their son, Andrew, committed suicide in the middle of the February 1974 election campaign. Later they set up a non-charitable trust in Andrew's name which has quietly supported a number of projects designed to extend democracy in Britain and abroad. After his retirement Richard chided those who hinted that he might go to the House of Lords for even suggesting that he "would go to the crematorium".

His policy specialism remained employment, trade and public finance throughout his political career. He was a member of the Commons Treasury Select Committee from its inception in 1979 until his retirement from parliament and was the party's spokesman, first on trade and industry, working with Eric Varley during the Lib-Lab Pact of 1977-78, and, later, employment. Curiously, despite being much involved in policy formation, Richard Wainwright only produced one publication in his own name, the booklet "Own as you earn" in 1958, preferring to foster and prompt others to write, through for instance the Unservile State Group of which he was a founding member in 1953.

His aptitude for understanding the practicalities of how to put together projects and campaigns was also seen through his membership of the Joseph Rowntree Social Service Trust (now the Joseph Rowntree Reform Trust) from 1959-84. During my time on the staff of the Trust I recall fellow trustee Jo Grimond making typically devastating critiques of applications for funding. Following a Jo performance there would usually be a short silence before Richard would gently ask "so what do we do with this idea?" Bit by bit, with Richard's prompting, a workable project would then often emerge.

Richard Wainwright did a great deal to encourage and foster the career of promising young Liberals. His solidity and dependability over more than fifty years played a more significant role in the survival and revival of the Liberal cause than might be realised by an outsider. Certainly in committing himself to the task of underpinning organisationally and in policy formation the more public leadership of Jo Grimond, Mark Bonham Carter and Frank Byers, not to mention his vital role as a party focal point during the turbulent Thorpe years, he gave stability to a party that was not overly enamoured of that virtue.

He is survived by his wife Joyce, his son Martin and daughters Tessa and Hilary. Martin is northern editor of The Guardian; Hilary edits the radical magazine, Red Pepper.