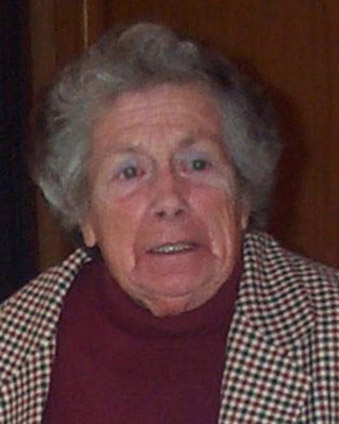 A remarkable individual and a doughty Liberal campaigner

Joyce Wainwright's funeral was typical of her and of the family. Her - disposable - coffin already in the eventually overfull Gipton Methodist Church, and Hilary, Martin and Tessa Wainwright at the door to greet everyone as they arrived. The service was emotional but never mournful and was replete with anecdotes from children and grandchildren which everyone recognised as making up the picture of the Joyce they knew and loved.

Joyce was always her own person. She played the role of Richard's partner and supporter with perfection, particularly when he was in parliament, but she clearly felt that, besides enabling Richard to achieve far more, this was itself a key way of promoting the Liberal cause. It certainly did not prevent her from campaigning herself, not only in the Colne Valley but also for women's causes, not least some of those acquired from Hilary's activities. She was delighted to be the President of Leeds North West Liberal Democrats when Greg Mulholland gained the seat.

She was involved in a myriad of local and international causes, ranging from consistent support for the Gipton Methodist Church and a number of charities for which she and Richard often opened their superb garden, with its renowned delphiniums, as a means of enticing many more donors and supporters.

One of my worst days in politics came when their son Andrew died in the middle of the February 1974 General Election campaign. It was typical of the stoical determination and deep personal resources of both Joyce and Richard that they were determined to carry on campaigning. It took all of Albert Ingham's and my efforts - plus, it should be said, the others parties' willingness to reschedule debates - to persuade them to take a short break to deal with immediate family matters.

Joyce was always genuinely interested in the families of her many political friends and had an encyclopaedic memory of their children's and grandchildren's names and activities. A meeting with Joyce always involved updating her mental file on one's family. The pleasures of visiting The Heath and, latterly, the bungalow, are now ended but the warm memories will last for a long time.