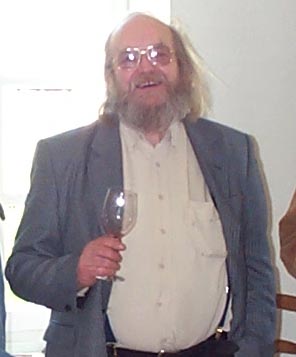 Geoff arrived on the local community scene some twenty-five years ago, just before I left Bradford CVS. He was an ideal voluntary organisation officer: intelligent, progressive, determined, comradely, patient - at least on the surface - and he wore a dog collar!

Since that time I got to know Geoff in a wide variety of guises. With Sylvia and Liz we dined together from time to time, swapping information on restaurants to visit, or enjoying leisurely meals in our homes. With Geoff in charge of the cooking there was always at least one, if not many, exotic dishes, usually with some ingredient known only to Geoff.

When we were looking for new partners in the house in the Languedoc, Geoff and Sylvia were obvious recruits and until Geoff became too ill to make the journey he was an enthusiastic user of the house and a knowledgeable taster and - much more - a consumer of the wine of the local Faugères appellation. The conviviality of the meetings of the house co-operative was always enhanced by Geoff's presence.

From time to time Geoff would produce some apparently recondite solution to a problem at the Faugères house. With his technical experience and scientific knowledge it was difficult to argue against some invention that to us innocents seemed completely weird and impractical. One such was a sort of self-condensing air conditioner which didn't need an outlet! We posed every possible question and objection but Geoff was as stubborn as ever. Eventually we suggested that he get on with its manufacture. Nothing ever happened! This was an example of one of Geoff's idiosyncrasies: during the time that he was keen on an idea no obstacle was insuperable, but once he had lost interest no amount of pressure could catalyse him into action. Sometimes it was just when one had got used to some Geoff idea that one discovered that he had abandoned it!

Geoff's computer skills were remarkable. He was very rarely defeated by any problem and on the odd occasion when he couldn't immediately rescue the situation, and after having spent an inordinate amount of time at Waterloo Lodge or wherever, there would be a later flash of inspiration and an immediate 'phone call or visit with an insistent demand to "try clicking this and scrolling to that ...." and it would usually work. He enjoyed equipping me for my missions to exotic places with innovative portable items and often some brand new dial up network that would work "everywhere."

Of course, even though solidly ensconced in front of the screen, lubricated probably too regularly with glasses of a good Faugères red, he would be conducting other rescue missions via his portable. I would only hear his end of the conversation and I would be fascinated by his apparent patience with a colleague whose technical naivety was only too obvious. After some minutes of "try this, try that .... what can you see? .... no, no, no - you've got the wrong screen .... you can't possibly have that visible etc," he would discover that he, or more often she, hadn't even got it connected to the 'phone line! The same conversations would even go on as we drove down the French motorways to the Languedoc.

One thing Geoff wasn't was a businessman. If he had been he would surely have been able to sell his technical skills. At heart the problem was that didn't really want to charge anyone anything! Consequently he fixed his servicing fee far too low and even then rarely got around to sending invoices. Attention to any sort of paper bureaucracy was far less of a priority than all the practical demands on his time. We had to remember when our "sub" was up and then force a cheque on him.

In a sense the Church of England was made for individuals like Geoff. It paid him a basic stipend which gave him great freedom to do "good works" that would never bring an income. He did, of course, give attention to his clerical duties, but his typical generosity to the local Methodists in offering them a home when their church was burnt down, paid dividends in that he had another team to share the formal services, particularly after his church at Windhill became a joint Anglican-Methodist centre of worship. He wasn't always fully attuned to the Methodist preaching "plan." On one occasion as we sat on the terrace at Faugères enjoying chilled white wine in the sunshine, his portable rang. It was the local Methodist secretary - wholly unaware that Geoff was not in the "parish" - wanting to check the hymns for a service at Baildon the day after! It took a number of calls, and some fast footwork, for Geoff to find a replacement preacher.

The same list of willing substitutes must also have been available when I needed immediate assistance on some far distant mission, as he seemed to be able to appear over one's shoulder almost as the 'phone call was still proceeding. "Send me a ticket, and I'll be there," was his constant refrain, and we often recalled with relish producing an illicit CD-ROM of the electoral register in Zambia, with Geoff surrounded by local staff and mountains of scanned paper from which the CD eventually emerged.

I only saw aspects of Geoff's parish life at Windhill from a distance, but his patience with individuals with problems, often men with serious mental illness, was remarkable. He never rejected anyone and continued to work with a number of people, both in the church and in the local community association, who frankly sometimes didn't deserve the care he lavished on them. How he put up with the vandalism and burglaries at the vicarage, I'll never know. And which other vicar would be able to construct a rotating iron frame big enough to cope with a whole sheep for a vicarage barbecue?

Once, after Geoff and Sylvia had moved to Oakenshaw, he was late arriving for a meeting and was giggling away as he got out the car. Apparently, as he was coming down his drive to his car, complete with dog collar, an irate man had accosted him. "It's about our Sharon. What are going to do about it? And you a clergyman." Geoff was, of course, totally baffled and said so. "Don't try and pretend you don't know," responded the man, "I want to know what you're going to do about it." Again, Geoff expressed his complete puzzlement. The man continued, "and you a man of the cloth, carrying on with a young girl like this." Eventually it transpired that "Sharon" was pregnant and that the man at Geoff's address was responsible. Geoff calmed the man down enough to enquire about the origin of the address. It turned out that it was the occupant of the same house number in Bradford Road, but in Cleckheaton not Oakenshaw! Geoff was rather chuffed that he might be thought capable of such "carrying on."

Geoff's technological skills were occasionally used in splendidly curious ways. Once, being in receipt of an e-mail telling him that a former Nigerian government offical want to transfer zillions of pounds to his account, Geoff replied from one of his many untraceable e-mail addresses. After a couple of e-mail exchanges, Geoff agreed to pay the required up front cash in order to have the Nigerian welath unspendable released. Geoff insisted on paying in cash and arranged to meet the Nigerian official at the disembarkment point of the Hull to Rotterdam ferry. Geoff had selected this precise spot as he had discovered that it was possible to receive an online feed from a CCTV camera on the quay. Geoff watched with glee from his home as the Nigerian walked up and down for ages, regularly consulting his watch, as he waited in vain for his "client" to arrive.

Geoff was remarkably well read, particularly on obscure subjects, and it was perhaps fitting that his last contribution, when he was already very ill, to the Notes and Queries column in The Guardian was on the fate of the Akong of Swat!

A great friend and colleague; often infuriating but always lovable; a bon viveur and a great human being, Geoff will be very much missed.