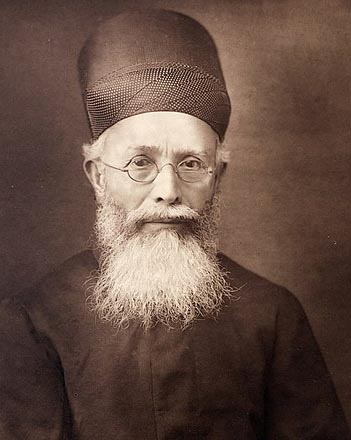 Unlike the majority of London clubs, the National Liberal Club (NLC) from its beginning welcomed Asian members and it was somewhat of an anomaly that hitherto all its portraits were of white British politicians. This has now been rectified with the acquisition of a commissioned portrait of Dadabhai Naoroji. He has a special place in British political history being the first Asian Member of Parliament when he was elected as the Liberal MP for the Central Finsbury constituency at the 1892 election, having fought Holborn unsuccessfully in 1886. Prior to coming to England he had been a distinguished academic and statesman in India, and was an advisor to Ghandi in his early years.

His agent at his successful election was the Club's first secretary, William Digby, who was a consistent agitator for Indian rights. Ironically Digby despite getting Naoroji elected, was himself twice an unsuccessful Liberal candidate in London. Naoroji narrowly lost his seat in the Conservative landslide of 1895.

When he joined the NLC in 1886 he was one of twelve Indian members. His Proposer and Seconder, W Martin Wood and Major Evans Bell respectively, were both prolific writers on Indian issues. Naoroji was a very active member of the Club and served on its General Committee for fifteen years, from 1890 to 1905.