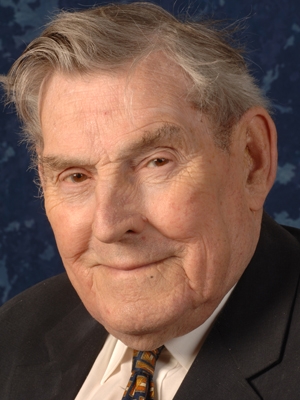 Sir Trevor Jones, who has died at the age of 89, formalised and finessed the Liberals' practice of community politics. He was not its originator, indeed he was far too practical to be a theorist, but he developed the brash leaflet based on local issues that electors' identified with. Delivered with great frequency during and between elections, it was at his first election that Trevor Jones that gave it the name of "Focus" which became ubiquitous, as it still is, for Liberals and, later, Liberal Democrats. As an organiser he had phenomenal energy and ambitions to match. First elected in 1968, he was the dominant Liberal influence in his beloved city of Liverpool until he retired in 1991. He clearly found it difficult to be away from the action and he returned to the city council in 2003 for a further six years.

Owen Trevor Jones was born in a North Wales village in December 1926 but his family moved to Bootle when he was young enough to acquire his clear Liverpool accent. He went to the local grammar school but left in 1940 at the age of fourteen. He then managed to conceal his age in order to join the Merchant Navy and served on the vulnerable Atlantic convoys that were essential to Britain's survival. He later served in Aden and was in Singapore at the end of the war. Seeing the emaciated Allied prisoners being released from the infamous Changi prison camp had a great effect on him. He married Doreen Brown in 1950. After the war he worked on the Liverpool docks until, in 1961, he borrowed £200 to buy a business dock fenders, which protect boats from dock sides. He built this up and diversified into other businesses, including a ships' chandlery.

Six years into his business life one of his warehouse was threatened with demolition to make way for a new through road. Trevor set about organising opposition and designing campaigning leaflets. Then, following an appearance before a House of Lords select committee to argue for conservation and against wholesale replanning in Liverpool, he turned to the political process as the way to influence decisions. His affinity with the underdog, and his Welsh roots, led him to join the Liberals, who at the time were barely above single figures in the polls. Within two years he joined Cyril Carr as the second Liberal on the city council. Trevor Jones and Cyril Carr were completely different but complementary. Cyril was a thoughtful lawyer with a long Liberal heritage who acted always with care, whereas Trevor leapt in with the telling phrase and sharp repartee. Trevor was initially loyal to Cyril's leadership until they fell out later in 1973, and at first he served as his deputy when the Liberals won control following local government reorganisation in 1973. Carr gave up the leadership in 1975 on health grounds leaving the way for Trevor Jones. In 1973 Trevor Jones was also elected to the new Merseyside Metropolitan County Council and led the Liberal group there. Amongst the new city councillors was Trevor's wife, Doreen.

Having established a strong Liberal bridgehead in a northern industrial city, based on community politics, he was frustrated that the national party's official lip service to this strategy was belied by its respectable image, typified by its then president, Stephen Terrell, a highly respected barrister with a distinguished war record, but who had openly criticised the young liberals' radicalism. Typically, after Terrell's year of office, Trevor decided to contest the presidency against the leadership's nominee, Penelope Jessel. He toured the country, distributed his "Focus" leaflets and romped home.

Even while he was campaigning for the presidency, he had got involved in the pending by-election in the Sutton and Cheam constituency. The party was at 8% in the polls nationally and locally it had struggled to hold its deposit at the previous election and when it adopted Graham Tope as its prospective candidate the local association was delighted to have a young liberal activist who had not been put off by polling only 6% there at the 1970 Greater London Council election. Thus, when Trevor approached him and asked if he would use his techniques Graham Tope agreed, realising that he had nothing to lose. Trevor took over the whole campaign with astonishing energy. He would pick on local issues and then produce all the leaflets and election material in Liverpool and drive down to Sutton with his Triumph Stag stuffed full of Focus leaflets which the local helpers then delivered. It was rumoured that the famous "Liverpool mattress" made its appearance in the leaflets, allegedly being transported by Trevor and dumped in order to be photographed and then publicly removed. When Des Wilson fought Hove a short time afterwards he said that Trevor was driving him around when an elderly lady tripped and fell while on a pedestrian crossing. Trevor slammed on the brakes and leapt out of the car, grabbing a camera on the way. He then photographed the uneven surface before attending to the lady! "It will look good on a leaflet," he commented. He once told me that he had voted in every by-election he had been involved in!

The final result in Sutton and Cheam was a Liberal victory by over 7,000 votes, conjured out of nowhere by Trevor. It was entirely a community politics campaign but, as Graham Tope has admitted, it was all faked - the actual community work did not begin until after the election. On the same day as Sutton and Cheam the Liberal candidate in Uxbridge, with a traditional campaign, polled just 10%. Other by-elections followed, usually with Trevor much involved, and with greatly increased Liberal votes with a number of victories, including Liverpool Edge Hill with his close colleague, David Alton.

Trevor Jones himself fought two parliamentary elections in 1974 - one, Toxteth in Liverpool, was theoretically ideal for his style but he finished a poor third. He commented that he had spent too much time campaigning for other candidates. He then tried to be adopted for the Orpington seat, narrowly lost by Eric Lubbock in 1970, but Eric's wife was preferred. Trevor then contested Gillingham but again finished third. Thereafter he concentrated on Liverpool city council and was leader of the council at the time of the Toxteth riots which upset him greatly. In 1981 he was knighted for his services to local government. However, the title he preferred was the one that combined his Welsh origins and his political skills - "Jones the Vote."

Trevor was never an easy colleague. He was intensely loyal and committed but he had little time for those did not accept his strategy. He retained his popularity not least because he was so effective. He was fierce with those who stood in his way. This applied to the SDP who stood against Liberal candidates in Liverpool and who, by splitting the vote, ensured enough Labour victories to put them in control and opened the door to the disaster of Militant. Trevor was fearless in standing up to their councillors. On one occasion he so riled Derek Hatton, Militant's key man, that Hatton shouted, "I'll dance on your grave." Trevor replied, "That's fine by me - I'm going to be buried at sea." When in March 1987 forty-seven Militant councillors were disqualified the Liberals came back into control and Trevor was again leader of the council. Having been a casualty of Militant's iconoclastic gestures, the office of Lord Mayor was reintroduced and was taken by Lady Doreen Jones. His refusal to give way to the SDP meant that Liverpool Broadgreen was one of only three seats contested by both Liberal and SDP candidates at the 1983 general election.

Unusually in politics, Trevor's municipal leadership was based chiefly on his remarkable organisational abilities and it is for these skills above all that he is remembered by his Liberal colleagues.

An extended version of that published in The Guardian on 24 September 2016.