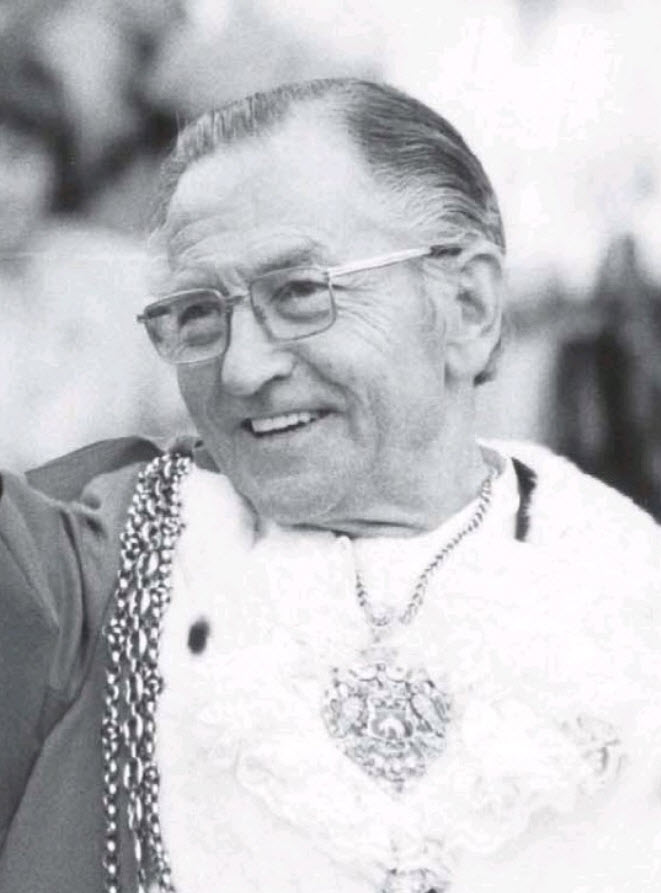 Honorary Alderman Douglas Gabb - Dougie to all his colleagues - has died just one month short of his hundredth birthday. To those in Leeds municipal life he was for forty-five years a constant presence on the Labour benches in the Civic Hall council chamber. His other long term political commitment was as Denis Healey's agent in Leeds South East and later Leeds East for the whole of his forty years in the House of Commons. After he had retired from parliament Healey described Gabb as his "best friend."

Gabb finished his schooling at Kepler School (later Roseville Secondary School) at the age of fourteen. His first job was as a page boy at the Leeds Grand Theatre but he left to fulfil his ambition to become a jockey and was employed in the stables at Newmarket. However, his mother made him return to Leeds to take up an engineering apprenticeship with the Blackburn Aircraft company. Then, after employment at the Yorkshire Copper Works and at the Barnbow ordnance factory, he moved to the University of Leeds where he worked for twenty-six years, latterly as the technician in charge at the Houldsworth School of Engineering. On his retirement he was honoured by the University with the honorary degree of Master of Engineering. Earlier, in 1975, he had been awarded the OBE for his services to local government.

First elected to Leeds City Council for the Osmondthorpe ward in 1954 he became an alderman in 1971; when the office of alderman was abolished in the local government reorganisation of 1974 he returned to the council as councillor for the Seacroft ward, which he retained until he retired in 1999. Shortly afterwards he was created an honorary alderman. Gabb's main council responsibility was as chair of the personnel committee and in 1974 he played a key role in the delicate task of enabling the staff of the different local authorities to be formed into a single department following the amalgamation of the Leeds County Borough with the eight neighbouring borough and district councils. He served as Lord Mayor of the city in 1984-85.

Dougie Gabb was a Labour party member for eighty years and was a formidable battler for the Labour cause and, though he was not a particularly effective public speaker, he could always be relied upon to intervene in support of the party's case in city council meetings, usually to refute opposition accusations. For many years he was secretary of the East Leeds Constituency Labour Party which at the time was regarded as one of the most left wing in the country. As secretary he skilfully managed to avoid being in danger of removal by the party bureaucracy by portraying himself as being on the left though, as one colleague commented, "He would support (in general) left-wing resolutions but took no action on them"! Despite his strong political affiliations he never let them harm his personal relationships with opponents. When interviewed in 2011 and asked what his particular interests were, Dougie typically replied, "Staying alive under the Tory/Liberal coalition government"!

His late wife, Ivy Jones, a Holbeck girl, worked at Montague Burton's Hudson Road factory until they married in 1941. For sixteen years she ran a family newsagent's in Headingley. Ivy died in July 1988. They leave three daughters, eleven grandchildren and great-grandchildren.