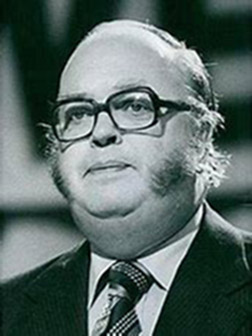 Gryff Evans was one of a small band of loyal and highly competent Liberals who occupied key positions within the party organisation from the mid 1960s through the '70s and who ensured that the party maintained a national presence and an effective electoral machine within the permanent constraints of finance and the electoral system. His warm personality, good judgement and conviviality guaranteed his enduring popularity with the party's rank and file.

I first met Gryff in 1960 when I was Chair of the Merseyside Regional Young Liberals and he was successfully campaigning to become the national chair of the YLs. Thereafter we enjoyed working together on a series of party events, each almost invariably followed by a one or even two sociable drinks! Gryff had been the forerunner of Liberal Councillors in the area having succeeded in being elected to the Birkenhead County Borough Council for the Claughton ward; he later took the name of his ward as part of title when appointed a Liberal Life Peer. By 1961 he was one of a quartet of leading Liberal Councillors in the region who, with Peter Howell Williams in Wallasey, Alan Lycett in St Helens and Jack Coleman in Southport, plus Cyril Carr elected in Liverpool the following year, responded to Young Liberal invitations to address meetings.

Gryff was brought up in Welsh speaking home and both sides of his family supported the Liberal Party albeit at times divided between the Asquithian and Lloyd George factions. He followed the same political affiliation. For his high school education he was sent to the Friars' School in Bangor and it was there that he scored his first electoral success, standing as the Liberal candidate in the school's mock election to coincide with the general election of 1945. From 1965 Gryff chaired the party's National Executive Committee, a term of office that coincided with Jo Grimond's resignation as party leader. Jeremy Thorpe was the only Liberal MP to have been in the House of Commons more than three years and was regarded as Jo's obvious successor. Gryff was one of the small group of party managers at HQ who believed that Thorpe would be a disaster as leader - mainly for political reasons but also for aspects of his personality. Together with Pratap Chitnis, the party's Chief Executive, Tim Beaumont, the previous Chief Executive, and in a lesser role myself, Gryff endeavoured to canvass support for an alternative candidate via the consultations taken with local councillors and party officers, even promoting Richard Wainwright against his express wishes. The insuperable obstacle, however, was that the criticisms of Thorpe had been so successfully hidden by party officers that the membership were wholly unaware of them and were almost unanimously in favour of him succeeding to the leadership. And so the cabal failed.

The consequences of this failure eventually became clear. As before, the party's ability to conceal the constant problems with its leader from the public meant that when Thorpe's liaison with Norman Scott and the charges of the attempted murder of Scott - on which he was later acquitted - broke in the press it suddenly became a sensational cause célèbre. Thorpe had to be pressured into resigning the leadership and his successor, David Steel, extracted his promise not to attend the Southport Liberal Assembly in September 1978. He promptly broke that promise and effectively hijacked the whole conference. Gryff was the party president at the time, I was the chair of the Assembly Committee and Gryff's great colleague, Geoff Tordoff, was the Chair of the National Executive. A well-intentioned delegate from Hove, Dr James Walsh, wholly unaware of the long years of serious problems with Thorpe, tabled a motion of censure on the party's officers for "their treatment of the former leader." We three officers met and decided that it was time to give the full facts to the party members and would therefore tackle the motion head on and that, if it were carried, all three of us would resign on the spot! Gryff led the response to the motion and made a powerful speech whose frankness clearly staggered the delegates, so much so that the motion was withdrawn.

One particular aspect of Gryff's skills not often mentioned was his remarkable ability as the chairman of any meeting large or small. He had a intuitive skill of sensing when to be tough and to push decision through and when to allow delegates or committee members to let off steam. On the Assembly Committee we would regularly allocate the most difficult debate to him to chair. He invariably got through to the end unscathed and maintained the delegates' good humour. After one particularly long and tortuous session he came back to the Assembly Committee's room and flopped into chair, demanding "an octuple Scotch"!

He continued on Birkenhead County Borough Council and, following local government reorganisation in 1974, on the successor Wirral Borough Council and, later, on the Merseyide Metropolitan County Council, as Leader of the Liberal Group until 1981. Three years earlier, in May 1978 he was appointed as a Liberal Life Peer, as Baron Evans of Claughton. He also played a key role at party headquarters during the 1979 and 1983 general elections. His three parliamentary election contests in Birkenhead, twice, and Wallasey were sadly unsuccessful.

Gryff played significant roles in two other controversial internal party struggles. First, was the leadership's attempts to make the Young Liberals "respectable". It was the era of radical youth politics and the Young Liberal officers became known as the party's "Red Guard". Jeremy Thorpe and a number of other key officers objected to their tactics and in 1970 Thorpe set up a commission, under the chairmanship of the party's president-elect, Stephen Terrell QC, to look at the status of the Young Liberal within the party. Gryff was appointed as a member of the commission which eventually produced some fairly anodyne proposals. Even so it made a number of criticisms of the Young Liberal tactics and Gryff wrote what he called "a note of warning" arguing that whereas the Young Liberals' public attacks on the party leadership could not be condoned, "the open contempt for the views of the mass of the party by some MPs, particularly the Chief Whip of the time, inevitably contributed to the stridency of the YLs who realized the only way to be heard was to shout loudly and rudely."

The other key role Gryff played was during the Lib-Lab pact of 1977-78. It was a fraught period of some fifteen months with inevitable - and legitimate - tensions between the parliamentary leadership and the party members. A special assembly was called in January 1978 at which the arguments for and against continuing the pact were debated and an acceptable compromise agreed. Gryff chaired the whole day and coped brilliantly with the difficult procedural proposals and counter-proposals. Whatever his personal views on individuals and issues, he acted with great loyalty to the party throughout many difficult years. I doubt that he had a single enemy within the Liberal Party.

Gryff's personal stature and the respect for his abilities led to a number of civic and voluntary sector appointments. He was held in great respect within the wider community as well as in the political sphere.