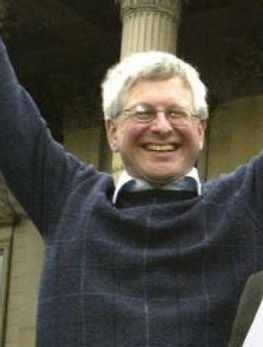 Julian Cummins, who died on Sunday aged 52, was one of life's great enthusiasts. There were no half measures about him. Julian embraced many widely different causes and launched himself into them all with great passion. Ethical businessman, committed Liberal, Anglican priest, Territorial Army Officer, adopted Yorkshireman - every role appeared to demand his full attention.

Julian Cummins was congenitally incapable of sitting on the sidelines, which meant that his friends and colleagues were often taken unawares by a change of direction. Having managed to become accustomed to one commitment they would find Julian had moved on. Not that he completely abandoned any previous role - he simply grafted the new onto the essence of the old, so that Julian the businessman became Julian the priest but with a concentration on ethical business. Furthermore he could never quite understand why the occasionally bewildered colleague couldn't keep up with changes which to Julian were perfectly obvious.

Julian Cummins was born in North Wales and sent to Wellington College from where he went on to King's College, Cambridge. At university he was active in the Union of Liberal Students and wrote for Liberator, the radical Liberal magazine. Typically, he contested the Newnham ward for the Cambridge City Council in 1976 at the tender age of 21. His MA was followed by an MBA and, later, a Ph.D.

He was briefly employed by Proctor and Gamble but soon went to York to work for Terrys. Once again he threw himself in to political activity and contested the Knavesmire ward in 1978. A brief essay into the world of printing convinced Julian that his talent was more for supporting and enabling others. This entailed a move to Leeds and the launching in 1981 of his Avista marketing and public relations company, based in Yeadon.

He was elected to Leeds City Council for the Horsforth ward in 1982 and re-elected in 1986 but business commitments forced him to stand down on 1990. He was the Liberal Alliance candidate for the Pudsey constituency in the 1983 and 1987 general elections, coming second each time without making a great impression on the Conservative majority. He remained a Vice-President of Yorkshire and Humberside Liberal Democrats.

After fifteen years of frontline marketing work at Avista, Julian abruptly changed direction and entered the Anglican ministry, being ordained in 1997. He served as a non-stipendiary curate in Lower Wharfedale from 1997 to 2001 and then as an Assistant Priest at St Peter's, Bramley. His wife, Daphne, had also been ordained and became the Rector of Stanningley. In 2006 he also took on responsibility for "Yorkshire Church on Show" which promoted the gospel at the Great Yorkshire Show each year.

Following his ordination Julian's new sphere of political activity became the Yorkshire and Humberside region. In 1998 he became a board member of Yorkshire Forward and, later, chairman of its Scrutiny Committee. He became a representative of the faith communities on the Yorkshire and Humberside Assembly and chair of its "Quality of Life Commission." In 1999, with Ian Stubbs, he wrote the booklet "Investors in People in the Church." During John Prescott's ill-fated attempt to create elected regional assemblies, Julian became the chair of "Yes4Yorkshire", the campaign for a regional assembly. When the opposition and apathy of the voters at the first referendum in the north-east killed off the whole Prescott initiative, Julian commented ruefully that the government's plans lacked enough substance to inspire anyone.

At the May 2003 Leeds City Council elections he stood for the Liberal Democrats in the Bramley ward, coming a relatively close second to the Labour candidate. However, any prospect of continuing to nurse the ward was ended by a serious brain haemorrhage which threatened his life. Typically he refused to regard this experience as a deterrent to his religious and political life and made a remarkable recovery. He had always continued with his Territorial Army career, reaching the rank of Major. By 2006 he felt sufficiently fit to contemplate active service abroad.

A keen sailor Julian went to Majorca last weekend with a friend to work on his boat "Alcuin". Within hours of arriving on the island he suffered a seizure from which he failed to recover.

With his deep religious convictions and his military commitment, Julian Cummins was somewhat different to those in the mainstream of recent Liberal politics but he took the inevitable good natured teasing in his stride. His innate Liberalism was never doubted and he was a popular and respected member of the regional Liberal Democrat leadership.

Rev Dr Julian Cummins, born 29 January 1955, died 11 February 2007. He is survived by his wife, Rev Dr Daphne Green, and by his two daughters, Olivia and Caroline.