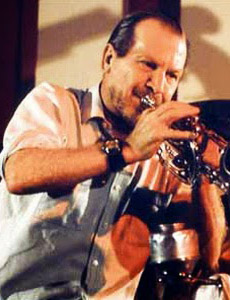 Ken Colyer had been seriously ill a sufficient number of times for us to believe he would simply continue indestructibly. Ken and his music have been part and parcel of the British jazz scene for almost forty years and it was too easy to take for granted his occasional forays to regular jazz haunts around the country. The key thing about the music was not only its consistency but also its capacity to suprise.

New Orleans style jazz has not always been well served by its imitators but Ken played it authentically rather than as a copyist. Whether during the early 1960s trad boom or in the leaner years thereafter Ken sought to apply that distinctive ensemble style to a wider repertoire of tunes than many of his hearers approved of. The old trad war horses were there, although never belted out raucously, but so were beautiful melodies by Arlen and Kern. In my opinion his best album is the 1958 Decca "Colyer Plays Standards", in which a number of unexpected tunes are given the New Orleans treatment with typical Colyer charm and warmth.

The other distinctive contribution to British jazz than Ken Colyer made was his enthusiasm for ragtime. Piano rags are popular enough, thanks not least to the belated publicity given to Scott Joplin by the film "The Sting", but few bands tackled the difficult task of translating them into ensemble form. Ken and his colleagues accomplished this with immense skill. It is appropriate that many of these rags are on a current series of re-issues of his records.

For jazz enthusiasts of my generation Ken Colyer was a glamorous figure. This was because of the story of his rejoining the Merchant Navy for the purposes of going to New Orleans, via Capetown, Port Sudan, Zanzibar, St Helena, the Pitcairn Islands, Auckland, Panama and Mobile, where he jumped ship and headed south to the home of jazz. Having arrived there he played and recorded with many of the jazz pioneers of New Orleans, outstayed his permit and was put in gaol and, thirty eight days later, deported. Ken's shyness and lack of conformity to the extrovert bandleader style added a certain air of mystery to his reputation.

It is a tribute to Ken Colyer's belief in his music and to his perserverance that there is today a continuing lively British interest in New Orleans jazz, including some of us who still try to play it - with far less expertise than he did.