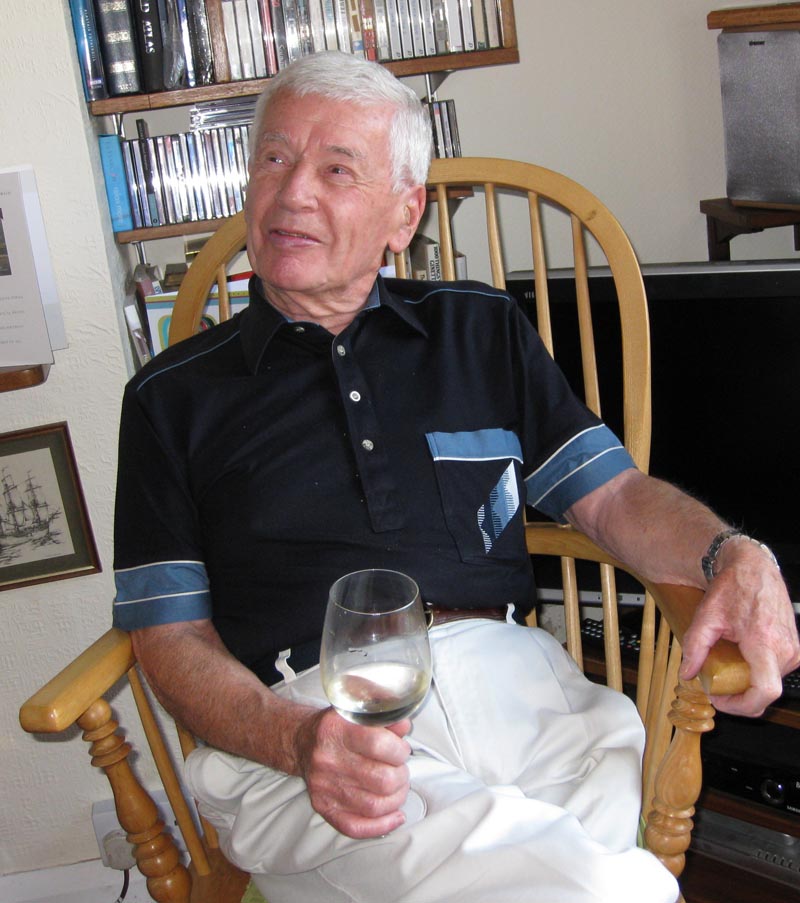 I was very happy to be asked by Audrey to share with you some of the events and experiences of Con's long life.

Ninety-five years certainly makes for a long life and, though we miss him now, we all, particularly Audrey, can take pleasure that we had him with us for so many years. Also at a time when we know of so many friends who are stricken with debilitating mental and physical illnesses over many years, it was great that Con had such good health right up to the last few months. Con's natural equanimity was certainly sorely tested by those last weeks and I constantly pondered how tough it must be for such an intelligent and strong man to cope with the slow diminution of his faculties. At least the final days of care were peaceful and painless.

Con's early life was somewhat chequered. His father contracted TB of the spine whilst serving in the First World War and was invalided out in 1916. He then spent two years in hospital in Sheffield before being discharged in 1918. He returned to the family home in Bawtry where he married Con's mother in September that year. He was almost permanently bedridden and died in 1929 aged just thirty-nine. Not surprisingly Con was an only child. His mother lived on until 1972. Not only did she have a hard life with a disabled husband but her father-in-law, James Bee, suddenly disappeared and neither then nor later was any trace of him ever found! Thereafter Con and his mother lived with her brother, Uncle Bill and Auntie Jess in Bawtry and, in Con's words, "they were an important part of my young life." Interestingly, although Uncle Bill was an enthusiastic Methodist Lay Preacher, and though Audrey was faithful Anglican member, Con never embraced religion.

Con was an excellent student and took his School Certificate and Matriculation, leaving school in June 1939. He then started on the work which became his life career, becoming an apprentice at the Blackburn Aircraft Company at Brough. He then studied at the Hull University College, obtaining his Diploma in Aeronautics in June 1943. Con had wanted to train as a pilot but the RAF had decided that recruits with engineering qualifications could only join the RAF as engineers - which he duly did. Just after the end of the war, whilst serving in the RAF, he contracted pleurisy and was invalided out of the RAF in January 1947. Soon afterwards he joined Rolls Royce and, apart from a spell doing a Post-Graduate course at Cranfield and a year at Hawker Aircraft, he was at Rolls Royce in the Wind Tunnel Department until his early retirement in 1983. He was, in fact, a Rolls Royce pensioner for many more years than he worked at the factory! Such was his expertise that he was often sent overseas to sort out problems with the RB 211 engine at Boeing in Seattle and the Lockheed Tri Star in California.

Con kept everything! Amongst his souvenirs was a whole page of photographs of attractive girls - two of which he was engaged to before Audrey! He actually kept the two engagement rings that he was given back! He didn't get a third one - marrying Audrey in September 1953, more than ten years after he had first met her. You can work it out - they were married for sixty-four years and lived at 81 Newdigate Road, Watnall, for sixty-three of them.

In July 1954 Audrey had twins a month premature. They were very tiny and, because their survival was far from assured, they were baptised in the hospital. The son, Christopher Arthur did not survive but the tough as nails daughter, Elizabeth Anne did! Perhaps the saddest souvenirs Con kept are the baptismal cards for the twins. Katie was born at home almost three years later. The family often spent holidays at Audrey's family's cottage at Robin Hood's Bay though Con was never as much a natural member of the Bay regulars as Audrey and her friends.

Con was always involved in "action" pursuits and at various times he did hydroplane racing, skiing, boating - which he very much enjoyed carrying on with Kate, Graham and the boys - sailing, including being part of the crew of a "tall ships" trip. In later years his daughters shared in Christmas presents which followed his predilection for adventure, including hot air ballooning, gliding and trying out racing cars at the Donnington Park circuit. He announced that for his ninetieth birthday he would like to go wing walking, but this was quietly ignored, being thought to be a step too far, even for Con!

In many ways Con was very much a modern man. He coped, for instance, with internet and with e-mails, and he was not, as far as I could see, at all censorious with his daughters marrying divorced reprobates - Graham and me! (Although Audrey did say once that she "couldn't have wished for two better sons-in-law, but she would have preferred them to have been more traditional"!) Also he liked to discuss political issues and was extremely thoughtful on current issues. But in two ways he was very old fashioned. He never volunteered any information on what he did at work. He was happy to discuss his work if asked but did not initiate the discussion. He was also very happy to explain aeronautics. I once asked him how the Hawker Siddeley jump jet could move from vertical takeoff to forward propulsion without falling back on to the ground. There were immediately drawings of the process of vents and engine direction changes. I have to say that it was somewhat too technical for me - but I appreciated it!

One often talks about "putting one's affairs in order" but Con had his affairs in order - permanently! But, and this was his other "traditional" role: Audrey never knew anything of their financial affairs. When, following Con's death I was grappling with all the accounts and bills in a large box and a small suitcase, Audrey commented the she had never seen into either of them! It was perhaps typical of a very responsible, generous and thoughtful man.

He was extremely fond of Ben and Ross, his two grandchildren, and followed their progress with genuine interest - Ben's flying career and Ross' employment development. He was very close to Kate and Elizabeth, not specially demonstrative but clearly very warm. I recall that when after her graduation Liz intended to buy a very nice back-to-back house in Meanwood, Leeds, Con was worried about her taking on such a big financial responsibility when so young. Liz very sagely, took him to see it. Later that day I joined the two of them in the Eagle pub (inevitably I had been away at some political meeting). Amid the noise in the bar he shouted to me, "I think it's a lovely house and I've told Liz that, if she can't sort out a mortgage, I'll help her with it."

In fact, both daughters benefited greatly from Con's early retirement with his regular forays to make or repair items for their houses. Liz, I know, always had a long list of jobs for him at Waterloo Lodge! He had a very active retirement. He volunteered to spend regular days at the Cats Protection League and he took up wood turning with considerable enthusiasm and application, being a founder member of the local wood turning association - some members of which we are delighted to have with us today. He produced many beautiful pieces, both decorative and functional. He and Audrey enjoyed foreign holidays, particularly in Greece, and, often together with Audrey, he enjoyed spending time with Kate and Graham on the boat at Falmouth. They also came a number of times to join us at the little house in the South of France and greatly enjoyed the wine tastings. Any mention of favourite wine producers Raymond Roque or Ollier Taillefer, and Con was immediately present! Those of you who come to the house after this service will enjoy the results! The photo on the back of your service booklet shows a relaxed and well-equipped Con!

He bore the agony of Kate's long illness and death with considerable fortitude. Just a few days before his cancer prevented such trips, together with Liz and me and, of course, Audrey, we enjoyed a meal out at a favourite restaurant. It is a lovely memory and I'm glad we made the effort. Con was a great guy and he made a great contribution to all our lives.