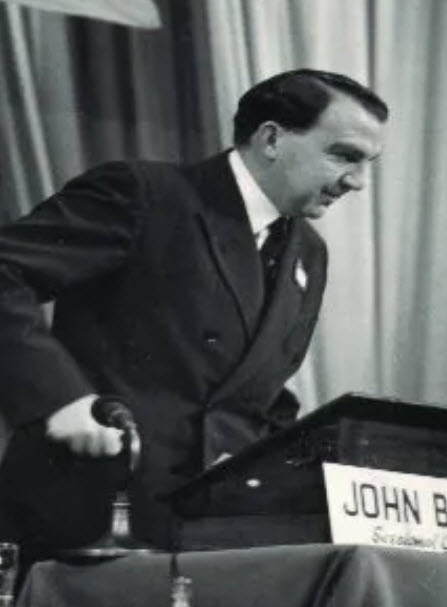 John Baker, who has died aged 90, was a well respected lawyer and Circuit Judge, an instinctive and consistent Liberal and a very convivial clubman. His quiet, courteous manner belied a toughness and determination that he demonstrated in his pursuit of fairness and justice. It was a key characteristic of John that he was never prepared to be a passenger, content simply to hold strong views. Instead he was always prepared to express his opinions and to act upon them, even when to do so might damage his chances of preferment.

John was born in Calcutta in November 1925, his father being a jute broker and a Great War soldier who earned the Military Cross as an officer with the Ghurkas. In the depression in the late 1920s his father went to Canada to find work. Shortly afterwards John's mother received a letter out of the blue from her husband saying that they had never got on and that they should divorce. One consequence of this was that John never knew his father and that his maternal grandfather, in Plymouth, had a great influence on John's childhood and education.

John attended Wellington School and thus missed the bomb which destroyed the family home in Plymouth in May 1941. John's mother was in the house but emerged physically unscathed although she remained thereafter very jumpy at sounds that reminded her of the blitz. John left school in 1943 to join the Royal Navy and was admitted to Wadham College, Oxford, at the same time. An endemic ear problem led to his discharge from the Royal Navy and he never saw active service although he had to join the University's naval division. John already knew that he wanted to be a lawyer and he therefore returned to Wadham College full time in May 1945 to pursue his studies. At the same time John became interested in the Liberal party, being particularly attracted by William Beveridge. Typically he became actively involved straightaway and later he felt that this was partly responsible for his gaining "by no means a bad third" which nonetheless he felt was disappointing. He stayed on at Oxford to retake the exams but with the same result.

John wanted to be a barrister but it was clear that the family finances would not stretch to covering the early years with little or no income. He therefore set about becoming a solicitor, signing articles in July 1948 and being admitted solicitor in 1951 with the firm of Amery Parkes. In 1957, thanks to Glanville Brown, a National Liberal Club member, he moved to Goodman Derrick, specialising in libel, copyright and the franchising of the early ITV companies.

He had continued his activities with the Liberal party and it was at the party headquarters that he met Joy Heward who was the head of the research and information department. Their friendship flourished, helped by their shared commitment to Liberalism and their affection for music, rugby and cricket. They were married in September 1954. John had joined the National Liberal Club on 2nd October 1946 and the clubhouse became a convenient meeting place for meetings of Westminster Liberal Association of which Joy was treasurer, and, of course, for convivial dining.

During his time at Goodman Derrick, John was involved in a number of high profile cases but he still wished to fulfil his ambition and, with the encouragement of Liberal turned Labour MP, Dingle Foot, John read for the Bar and was called in 1960, joining Foot's chambers. He and Joy had set up home in Richmond in 1957 and it is typical of John's lack of ostentation that, until they downsized only recently, he and Joy never moved, even though it would have been quite possible as his legal and judicial career progressed. Following on his heavy involvement in the Young Liberals and in the local association, John stood for the Richmond constituency at the 1959 general election, increasing the Liberal vote substantially but coming third. He stood there again in 1964 and further increased the Liberal share of the vote. John became a national party officer, joining the party executive in 1959, chairing the 1963 party assembly and was the party's vice-president in 1968-69. In 1970 he fought his final election, this time in Dorking, once again coming no better than a respectable third.

John's legal career progressed and he took a number of overseas cases, including appearing in courts-martial in Germany. He was also outspoken when he felt it necessary. On one occasion he told the minister, Virginia Bottomley, that a mentally ill man languishing in prison should instead be in hospital. A bed was found for him. On another occasion he presided over a controversial case in which an international player was accused - and acquitted - of breaking the jaw of an opponent on the rugby field. John told the jury, "The law of our country does not stop at the touchline." In another similar case a club player was convicted of GBH having broken the jaw of an opponent in two places. John gave him nine months and the Court of Appeal upheld conviction and sentence despite the fury of the Rugby Football Union.

He was appointed a judge in 1973 and John's autobiography, Ballot Box to Jury Box, published in 2005, recounts the number of representations he made on court procedure over his twenty-five years on the bench. His appointment sadly put an end to his political activities. He also temporarily resigned from the National Liberal Club, rejoining in 1990. He had previously been a Trustee of the Club and a member of the General Committee. He was Chairman of the Trustees, 2000-2003 and Chairman of the Club, 2006-2007. John's loyalty to the Liberal cause, his commitment to the Club and his dedication to the law was typical of this popular and respected colleague.