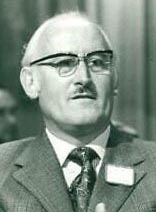 David Austick came late to politics but briefly found himself in the right place at the right time, being the Liberal candidate in Ripon when its Conservative Member, Sir Malcolm Stoddart Scott, died in 1973. Ripon was traditionally a solid Conservative seat but the Liberals were at one of their perennial peaks and Austick won the resulting by-election by just under a thousand votes, losing the seat seven months later at the February 1974 General Election. Despite further single-minded efforts in Ripon and, in 1979, in Cheadle, he never managed to return to Parliament.

In the last 30 years of his life, Austick largely devoted himself to three main causes. First was the book-selling business which had long underpinned his position in Leeds society and which sustained his political activities. Second was the Liberal Party and latterly the Liberal Democrats. His third passion was electoral reform and particularly the Electoral Reform Society which he virtually rescued from economic disaster in the 1980s.

Austicks Bookshops were the creation of David’s father, who had a somewhat relaxed attitude to business. By the time David came into the business, during the Second World War, the Leeds shop was in dire straits and it took considerable effort on his part, and that of his brother Paul, to turn the business round and to create the independent bookselling empire which has dominated the market in Leeds and district for 50 years, managing against all the odds to survive every attempt by the large multiples to see them off. One of Austick’s early “Saturday boys” was the author and playwright Alan Bennett.

Soon after I took over the Liberal Party’s regional office in Leeds in 1967 Austick came to see me, saying that he had thus far spent all his time building up the business and that it was time that he put something back into the city. He was, he thought, a Liberal, so what could he do? The immediate answer was to be a candidate for the City Council, and the following May he contested a safe Conservative ward in North Leeds. Shortly afterwards a vacancy occurred in South Leeds in a ward with a large residual Liberal tradition but without any existing presence. It was necessary to import a candidate and, given the ubiquitous Austick business name in the city, David Austick was the obvious choice. He scraped home by three votes and became the fourth member of a very new Liberal Group on the City Council, comfortably holding the seat until his parliamentary success caused him to switch his attentions to North Leeds.

He was an assiduous if somewhat pedestrian councillor and acquired a reputation for over-long speeches in the belief, perhaps as a consequence of entering politics late, that the other parties would be bound to be convinced if only he deployed every nuance of argument. Nonetheless his sincerity was never in doubt and his attention to casework in Hunslet was well appreciated. He served on the Leeds City Council until 1975 and was a member of the short-lived West Yorkshire Metropolitan County Council from 1974 to 1979. During his short time in Parliament he spoke mainly on health and social security issues but found it a struggle to accustom himself to the rough and tumble of the House. Nevertheless he desperately wanted to stay there and after his second defeat. in October 1974, he sought what he thought to be a more winnable seat and was adopted for the Cheadle constituency. Unfortunately the circumstances of the post Lib-Lab pact election of 1979 meant that he was defeated there by an even wider margin.

Austick applied a typically Yorkshire business style to his politics. Once convinced of a course of action he thereafter devoted himself to it single-mindedly. This sometimes provoked a caustic response from Liberals who, though passionate about their politics, did not always take kindly to managerial methods. This in tum would exasperate Austick who, being relatively new to the party and its wiles, expected a similar attitude to his own. It was, however, a measure of the personal high regard in which he was held, that his campaigning support and involvement was regularly sought and appreciated.

After the 1979 election, having realised that he was unlikely to get re-elected to Parliament, he turned his attention to the need for electoral reform and became the Executive Chairman and, later, Treasurer of the Electoral Reform Society. The society had got itself into a financial mess and Austick devoted much time and energy to putting it back on to a secure footing. He remained a member of the society’s council and a trustee of its associated charity, the Arthur McDougall Fund, until a few months ago. He was also very much involved in Leeds civic life.

By personality Austick was a compelling mixture of privacy and commitment. He came to his opinions by his own reading and conclusion. Thereafter action was taken on principle without consideration of how his business peers or the Leeds City establishment would regard it. He was, for instance, a conscientious objector during the war and was a long standing member of the Fellowship of Reconciliation. He was also a committed European federalist and was the Liberal candidate for Leeds in the 1979 European Parliament election. On the other hand he could be very old-fashioned so that for some time Austicks bookshops fought a rear guard action against its female staff wearing trousers, until forced by the law to accept modern attitudes to dress.

Despite its size, Austicks Bookshops remained a partnership between David Austick and his brother Paul and their wives until quite recently. No other members of the family wished to take on the business and somewhat reluctantly David accepted that the business should become a limited company. He still did not find it possible to opt out of the book business but he reverted to being a second-hand and antiquarian bookseller - a role in which he very much revelled in recent years.