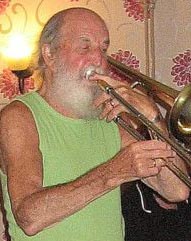 The jazz world is full of extremes of ages, from those who die criminally young such as Bix and, in the UK, Johnny Haim, to those who live - and play - into remarkable old age. Ed O'Donnell, who has died at the age of eighty-seven, was certainly one of the latter. At his death he had a programme of gigs extending well into the future.

He seemed indestructible and it is difficult to imagine the Yorkshire jazz scene without Ed O'Donnell. For almost seventy years, from 1946 to just a few weeks ago, Ed's trombone playing was an "ever present" in and around Leeds. His commitment to New Orleans jazz and to playing tailgate trombone from the early days of the revival of this great music right up to today's more depleted enthusiasts was legendary. There was hardly a venue in the Leeds area that Ed didn't play at, or a band he hadn't played with. What is more, listening again to his early recordings, one realises that his style and enthusiasm stayed pretty much the same over the decades. As he once remarked he was "trying to play like Jim Robinson."

Ed's first band in 1946 was the Vernon Street Ramblers, the name coming from the address of the Leeds College of Art where Ed was studying and, in fact, where he later worked for many years. He became a member of Bob Barclay's Yorkshire Jazz Band in early 1949 along with Dick Hawdon and fellow art college students Diz Disley and Alan Cooper, and recorded with them for Tempo. He left after two years and formed the Paramount Jazz Band and then led the Black Eagles Band.

Ed's brief claim to national fame came when Ken Colyer parted company with Chris Barber and the rest of the band that had been formed by Barber to welcome Colyer back from his illicit trip to New Orleans. Ed, and the pre-Acker, Bernard Bilk, were recruited by Colyer in June 1954. Ken's brother, Bill, knew of Ed and had written to him with information on the Guvnor's return. Fellow Leeds trombonist, Mac Duncan, aimed to be Ken's new bandsman but Ed landed the job. Ironically Duncan replaced Ed some months later at Ed's suggestion.

Ed has written that it was thought that he had taught Duncan whereas, "He taught me. He was far better." He was paid £6 a week with the Colyer band and they rehearsed every day in a studio near to Kings Cross. To survive financially most of the band shared a flat in Fulham, with Ken, Acker Bilk and Ed even sharing a bed!

Ed toured with Colyer for six months and then returned to Leeds. The disc "Back to the Delta" was produced whilst Ed was with Ken Colyer, (the session has been reissued by Paul Adams as part of Lake LACD 209). He didn't like London, "it was a drag," and, crucially important, "you can't get a decent pint of Tetley's further south than Wakefield."

Back in Leeds, Ed briefly led the White Eagles Marching Band before forming his own New Orleans Jazzmen which has continued up to the present day. Not one to suffer musical fools gladly, Ed was regarded with immense affection by the jazz public in the North of England who willingly forgave his peccadillos for the sake of his loyalty to the music and his willingness to turn out and help colleagues on every occasion. In September 2009, for instance, he turned out in the band at his old Yorkshire Jazz Band colleague's Dick Hawdon's funeral, saying, "I had to be here for Dick." Ed's regular signing off comment at the end of a gig was, "Remember the Ed O'Donnell band - it's the only game in town." For many jazz fans it was just that for very many years.

Ed had recently been ill and was awaiting further surgery. He had seemed ageless and will be much missed. His funeral was held in Leeds on 4th March. The band that led the procession to the crematorium was included members of Ed's current band, including Arthur Stead (trumpet), Tony Denton (clarinet), Jim Wright (banjo) and Annie Hawkins (bass) and was followed by a celebration at the Leeds Jazz Club. Everyone's sympathies are with his wife, Anne, whom he married in 1959, and his daughters, Frances and Kate.